I spend quite a lot of time engaging in, and often just watching, on-line arguments between believers and non-believers. I say arguments, because it’s rare that they can accurately be described as a discussion.

One of the most regular accusations I see comes in the form of “you are just a believer of scientism, so you have a religion too you know”. That’s not a direct quote, that my paraphrasing of the many different ways in which the accusation is worded.

The video in the post below explains well the thinking behind the scientism accusation. It takes ten minutes if you feel the need.

I like the very subtle irony that is best summarised as “you call me wrong because I believe stuff without evidence, but see, my logical argument proves you are the same, so you are just as wrong as me.”

The magic is really at the end 30 seconds of the video, it uses an example of Tyco Brahe’s model universe to show how something that is successful isn’t automatically correct. I agree, see religion. The point the video misses though is that the model was shown to be wrong by observation. The very thing that scientism mocks the love of.

So you’d think that this would be the perfect opportunity to roll out something that we know which hasn’t been measured or observed, you’d think someone wanting to kill the monster of scientism would have the magic dagger waiting there wouldn’t you? Well I did anyway.

Spoiler alert, no such thing is offered.

This absurd accusation comes from the religious mind’s favourite non science claim, that in a world of pure science, all sorts of evil acts are accepted. The foundation of this the belief that morals are supernaturally assigned to us and cannot be explained any other way. Errr, wrong (http://www1.umn.edu/ships/evolutionofmorality/text.htm).

Wikipedia has a more balanced description of scientism (https://en.wikipedia.org/wiki/Scientism). Which says that is the position that science is the most authoritative way of knowing. This differs from the religious claim that it’s the only way.

Finally, it may be worth noting that descriptions of scientism are littered throughout religious commentary critiquing the scientific method to the point where the question has to be asked, “What are they afraid of?” Commentary of scientism within the science community is almost absent outside of the context of science vs religion.

It’s as though science and scientists don’t even give two hoots about the accusation, I for one agree, it’s practically a worthless accusation because it assumes belief for the accusation to stick and yet those who throw the accusation require belief above all else.

Confused? You should be.

I’m reblogging this because it saddens me and I want to spread the sadness further rather than just pour sympathy into the comments section.

The author of the blog is also a good writer and an intelligent conversationalist.

that atheists pose a threat to peace, welfare and good order of a nation? I think we have a long way to go in creating an all inclusive society.

The registrar of societies in Kenya, Maria Nyakiri, thinks so. She says so here 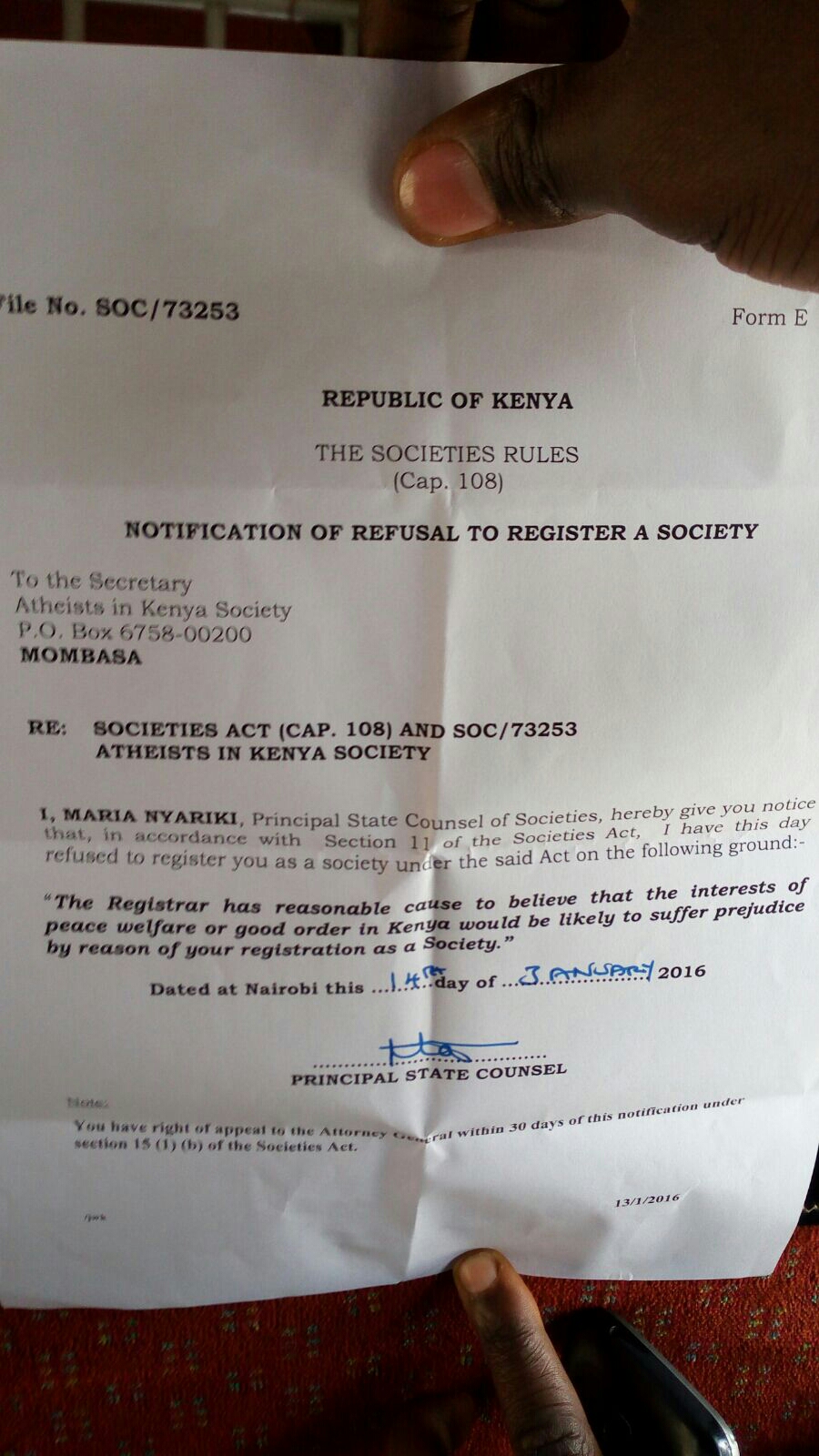 refusal to register atheists as a society