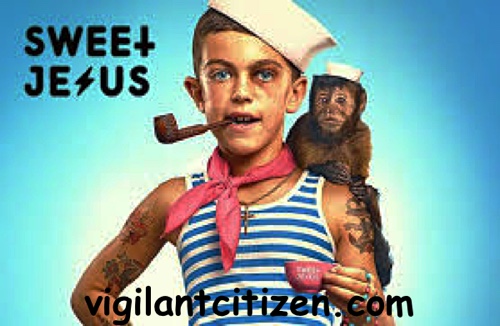 This blog post raises a theme I have often seen made in Christian circles and it really is among the dumbest claims that get made by Christians. It comes under the banner of validation by self identified victimisation. Apparently, being mocked validates your beliefs. Or rather, mocking something means it’s real because no one ever mocks a not real thing. Golly!

Well, that must mean the earth is really flat, unicorns exist, there’s a pot of gold at the end of every rainbow, and amazingly, atheism really is true! Oh the contradiction!

But, the question that you really want me to answer is….

Would I try this Ice Cream? Hell yes!

More importantly, why didn’t I know about it when I was in Toronto last summer? Oh well, guess I’ll have to arrange a trip back one day.

#  Some of their promotional slogans

#  They are a good advertisement that Jesus is real.

Nobody mocks a non-entity, a fiction or a fable.  They do what the Bible says:

I spend quite a bit of time on Facebook discussion boards on religion. I generally try to be polite and considered, but there are also times when I let that drop and I respond to theists in the manner that they have spoken to me. The result of that is that I have been called anti-theist.

I don’t especially object to that label, mainly because how a theist wishes to describe me is of little concern to me. Over the years I’ve been called lots of things by theists and as a general rule I’ve noticed that theists who apply labels to those like myself tend not to be bothered by the accuracy of their proclamations. SO being labelled anti-theist by a theist isn’t something that bothers me at all, though it’s not a label I would necessarily apply to myself.

That’s not to say I don’t find some things abhorrent that come from the religious, those things do exist and when I see those things I do shake my head and wonder to myself “Where does this poison come from?”

One such example happened only this weekend, in response to the following story.

I can’t even comprehend what would drive someone to do that. The story makes me shudder at the imagined pain such an act would cause.

So what is my anti-theist beef today?

Well, I was alerted to the story when a Christian posted it to Facebook with the comment

Everybody’s got a religion…

I hope the title of this post isn’t seen as click-bait because it’s all true. I am excited and it is about a book and a website , but it’s also more than that.

For the past year I have been involved in a collaborative project to get a book out, it’s been running under the title of The response Book Project and it’s gone live and there are plans to expand the site into something more. The something more will have to wait for now, this post is about the book.

But first the link, the curious can click this link and come back here for the boring bits later.

It all began with a Christian radio show and podcast called Unbelievable? I’ve been a regular listener for a number of years, as are many atheists. It’s the only religious podcast I regularly listen to, because it is generally interesting, relaxed and stimulating to listen to. Details can be found at the link below:

Last year, the host of the show released a book to state why, after ten years of hosting the show and talking to atheists, he was still a Christian. The book was officially launched at the Unbelievable? conference in London and I attended, along with a handful of other atheists to get our hands on the first copies of the book so that the response project could get underway. On balance we were not all that impressed. It seems that talking to atheists does not involve listening to them.

Find the book here, if you dare:

Well, the site is not intended to be a static site. All the chapters of the response book are free to read on the site and there is a Discus comment block under each one so the hope is that there will be a chance to take the response further and have an active back and forth and not a stale opinion page. There are plans to extend the site beyond just this response book, but those ideas will have to wait until they are made real before I announce them here. For now it’s just the book and that’s about all the excitement I can contain anyway.